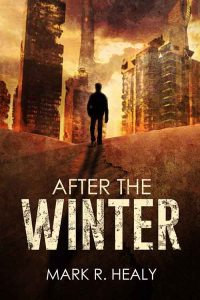 Hibernal will be returning in 2015 with a new album titled ‘After the Winter’.  Once again set in the Hibernal universe, the story occurs a number of years after the events in ‘Replacements’.

In addition to the album, I will be releasing a THREE NOVEL TRILOGY, starting with the first book, ‘After the Winter’ on Nov 3, 2014.  The novels will greatly expand on the story presented in the album, with more characters, events and backstory regarding the Hibernal universe.  See the cover reveal below, along with the synopsis:

The Earth is in ruins. Cities and nations destroyed. Those who survive the onslaught succumb to the cold blackness of winter. A handful of machines finally emerge into the light, lost and directionless. They are the last remnants of civilisation.

Brant is a synthetic – a machine who has the appearance and emotions of the humans who made him.  He is hunted across the wasteland by cruel scavengers known as Marauders who are intent on cannibalising his body to prolong their own lives.

Brant carries a great burden as he tries to return home: a secret that can change the world.  Against the unforgiving desert, the twisted denizens of this new world and his own dark past he needs to find a way back at any cost.